Ok this is where the rubber meets the road.  What Products & Services are we actually providing here at Elthos?  Well that's a little bit complicated because there's more to it than one might think at first glance.  So here's a breakdown by category.

The RPG System That Rules The Worlds

The Elthos RPG is a light to medium weight Role Playing Game. It’s our flagship product. Think of it as the ideal physical companion to our Service, the Mythos Machine, which is our Web Application which supports the Elthos RPG. The Elthos RPG by design is focused on one thing – encouraging Gamemasters to exercise their own imaginations. So it is Setting-lite in order to give the GM the room to flex their own creative muscles.  Why rely on someone else’s idea of a World when you can create your own? If you’re the creative type, Elthos is built for you. And if you aren’t, you should probably get Elthos and start exercising those creativity muscles anyway.  It’s good for your brain. And frankly, GMing your own World is a lot more fun than riding along with someone else’s creativity.  You just need to get started. And Elthos is a great place to start. Read more about the Elthos RPG Core Rules…

Get a copy of the Elthos RPG Core Rules Book and start creating your own World today.

Every Game There Is More Art

Over the years as the Elthos Project has progressed, there’s been a lot of artwork created by Mark Abrams related to the World of Elthos. Usually done in pencil, sometimes augmented with colored pencil, and pen, on watercolor paper, these pieces have become part and parcel of the project as a whole. Our goal is to inspire people to think creatively about their RPG Worlds, and the artwork often times helps to foster new ideas. We’re going to be offering a lot of the Elthos Art on DeviantArt, and we’ve created a line of T-Shirts on which many of these pieces will also find their new home. What better way to show your support for the Elthos Project than to wear a lovely 100% cotten T-Shirt, or imbibe your coffee from a mug with a beautiful bit of Elthos Art on it?

Mark Abrams has been Gamemastering since 1978, and along the way has run a variety of professional games for kids between the ages of 9 and 12. Are you a parent who is looking for a wonderful experience for your children? Mark Abrams’ world of Elthos is a fusion of fantasy and science-fiction, Arthurian Romance, and Epic Adventure, and bundles educational material inside every adventure. Mark will be offering Professional Games for kids soon.  Stay tuned!

Build Your Own Elthos World Online

The Mythos Machine is a wonder of 21st century technology that fuses your web browser with the Elthos RPG. It is primarily a game prep tool that helps Gamemasters create and maintain their own Worlds by smoothly and efficiently doing all of the number crunching for you, and providing a centralized online location to store your World’s Characters, Places, Adventures, and Story. It also allows your players to generate and maintain their Characters online. Elthos RPG Tools is a comprehensive system designed to make your Gamemastering easier, faster and more elegant.   Read more about the Mythos Machine…

Create and Sell Your Own Worlds Online

The Mythos Machine will soon allow Gameasters to create entire Worlds, and then put them on the Worlds Market Place for other Gamemasters to install and use.  Gamemasters will set their own prices for their Worlds, and the Elthos site will take a small commission.

We’re looking forward to finishing the development of this concept!  If you think this sounds worthwhile please consider making a “Friend of Elthos Contribution” and support the effort.  Thank you!! 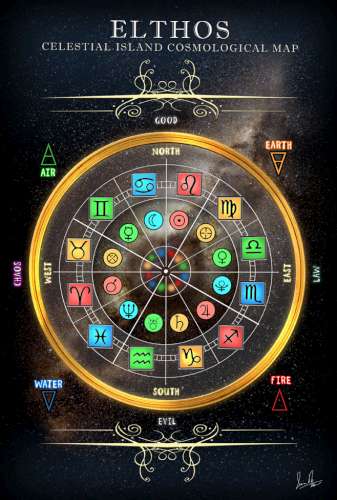 Don’t Get Lost in the Cosmos Again!

Always find your way back to your home dimension quick and easy with the Elthos RPG Celestial Island Cosmological Map!  There is one on the back of every Elthos RPG Tarot Card!

The Elthos Tarot Deck was created by Mark Abrams, with original Artwork by Jason Moser, and serves as a touchstone for the Elthos World cosmology that underpins the Alignment System aspect within the Mythos Machine. It embodies the correspondences between astrological signs and Jungian Archetypes, as well as their associated elements, plants, trees, gem stones, animals, musical notes, and many other interesting things, and is used to give Gamemasters a framework by which to make symbolic associations for their Worlds. There will be a lot more written on this topic in future years. In the meantime the Tarot Deck will soon be available on DriveThruRPG. We have the cards, we just need to wire up the Tarot Deck on their site. Please stay tuned. Coming soon!

Ok that’s a lot.  But there’s even more the Elthos Project. We’re kind of like into the whole Big Vision thing around here. We really believe in Role Playing Games! In fact, my opinion is that they will become the entertainment of the future. Why? Because RPGs invite you to exercise your own imagination. Why watch someone else’s story, when you can be the main Character of your own? That’s what RPGs do for you.  And that’s why they’re so incredibly fun.

But (there’s always a but, isn’t there?), seriously… RPGs can be hard to get into. A lot of people find them just a little too hard. So our mission at Elthos is to make RPGs just that much easier. We do this by bringing together a light-weight yet traditional style RPG and an amazing Web Application that supports the Gamemaster with dozens of integrated services.  Overall the plan is to make Gamemastering easy-peasy.

And that’s just the basic concept. We’re also working towards encouraging higher caliber Gamemastering through two support groups. One is dedicated to help Gamemasters find ways to tell interesting stories with their Role Playing Games. This is the Literary Role Playing Game Society. It’s goal is to explore ways to bring literary motifs and methods into Role Playing Games so that the stories that come out of the games are of a higher, more literary quality. Why just watch your players hack and slash their way through a murder-hobo, when you can be Gamemastering a story as awesome as King Solomon’s Mines, or The Three Musketeers?

The second support group is the Professional Gamemaster Society, which intends to help Gamemasters level up their GMing skills to the point where they can “Go Pro”. This idea has generated a lot of enthusiasm among some Gameamasters.  We recognize that Gamemastering is something that requires a lot of skill and a lot of talent to do well. And it takes a lot of time to both create a meaningful World, and prep for games.  It has dawned on not just a few of us that if we could do this full time, rather than as a hobby where we can only devote a few hours a week to it, we could really hone our skill and become – well, brilliant at it.  So to this end we are encouraging Gamemasters to level up, and Go Pro.  The Society is here to help brainstorm and discover avenues of approach to this goal, and support one another on our journeys.

The Big Vision is that in the future there will be amazing Worlds crafted and run by truly astounding Gamemasters using state of the art technologies to help them amaze and astonish their Players. And those Players in turn will awe and inspire themselves and their friends with the incredible adventures they have. Personally, I feel certain that the future holds great things in store for Role Playing Games, and my dream is to help others to see the potential and inspire them to achieve it.